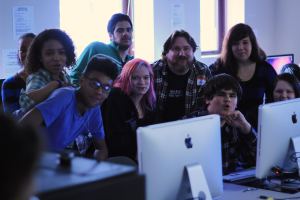 GiveMe5 Labs challenge participants to produce finished short films of roughly a minute, in only – you guessed it! – 5 hours.

Labs have been happening 2 -3 times a year, usually with about 30 students participating. You’re randomly assigned to teams of about 5 students each, with a dedicated coach and often a teaching assistant.

The teams are given some instruction as a group, and a line that must be included in the film. Then they brainstorm to come up with a story. Each team must also use at east one prop from the prop table.  Developing a one-minute story with a beginning, middle and end is, in itself, an achievement. Then the team immediately takes the cameras, props and equipment from the GiveMe5 program and produces the film they conceived. Then it’s off to the editing lab, where the footage is pieced together, sound and music is added, credits are developed and any special effects are executed.

Finally, everyone watches and discusses each team’s finished product.

It all happens in one afternoon. Different sessions have focused on different film making challenges – like using storyboards, using camera angles to communicate visually, or using Foley sounds to communicate without dialog.